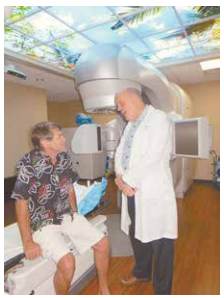 Zeroing in on Moving Targets

Simply put, the aim of using radiation therapy is to zap and kill cancerous cells while doing as little harm as possible to healthy tissue, said Dr. Bobby Baker, the Pacific Cancer Institute of Maui’s founder and president.

That goal has been elusive, especially with cancerous tumors in organs such as the lungs or liver that move as patients breathe, he said.

This month, the institute began Stereotactic Body Radiation Therapy for patients with its TrueBeam STx system from Varian Medical Systems. The new system is giving oncologists the high-tech tool they need to accurately target and kill cancerous cells, even when they’re moving in the body.

The first three Maui patients began the treatments this month at the cancer center, and more are scheduled to start soon.

“This is one of the most exciting times in my career,” Baker said. “Just when I thought I had used every tool possible in the fight against cancer, now we have this amazing system.”

The new Real-time Position Management system can track a tumor’s movement and treat it only when it is within a window that has been custom designed for each patient. To do this, technicians collect breathing information from patients on a new computer system while the patient gets a CT scan simultaneously.

The information is then transferred to the treatment planning system and, after a plan is approved by the radiation oncologist, the data is loaded into the TrueBeam Stx linear accelerator where a small focus of treatment is placed on the patient’s moving tumor.

Greg Benson, 65, of Kihei is one of the cancer center’s first patients to receive Stereotactic Body Radiation Therapy. He had his fourth and final treatment Friday. “I think it’s awesome,” he said. “I’m really grateful to Dr. Baker for providing this.” Benson was being treated for colon cancer that had reached his lungs.

“It’s like taking an X-ray,” Benson said in describing what it was like to be treated by the therapy. “The difficulty of maintaining a stable position for a long period of time” is challenging during the treatment, but there was no pain, he said.

Drs. Clayton Chen and Diane Tsai, both radiation oncologists at the institute, are already treating patients with the new therapy. Specialists from the University of California-San Diego, who have the same system, spent a week this month on Maui to help train the cancer institute’s staff and answer questions.

David Doan, a CT scan trainer for the Real-time Position Management system from GE Medical Systems, said: “This facility was the most prepared that I have ever worked with to start this new respiratory motion program.” Baker and Tom Sullivan, a physicist with Pacific Cancer Institute, earned certificates of training for Stereotactic Body Radiation Therapy last year from the Stanford University School of Medicine Symposium. For many patients in Hawaii, options for treatment have been limited. The new system at the Pacific Cancer Institute of Maui allows doctors to treat lung cancer for patients who couldn’t have surgery or didn’t want to. It is also designed to treat metastatic tumors in the lung and liver. Pancreas tumors are being treated with this technology as well, according to the institute.

While the procedure is called radiosurgery, no scalpels, incisions or needles are required. Thus it is a noninvasive procedure. “I have been treating cancer patients with radiation for about 30 years,” Baker said. “Now I am going to focus the rest on my career on providing the best radiosurgery for our patients.”

He added that the institute is getting calls for patients on other islands to receive the new therapy on Maui. Baker and the other radiation oncologists on Maui are also using the TrueBeam Stx for treating brain tumors. In some instances, only one treatment is needed, and it can be done in just minutes. “I remember when I used to have to take patients to Honolulu to treat them on the gamma knife,” Baker said. “We had to mount a steel halo on their head for hours before we could finish their treatment. No more.”